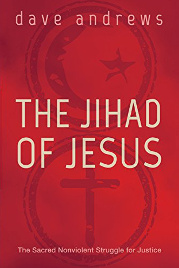 Listen to Dave Andrews & Songs in the Key of Be as Recorded on Radio National's Rhythm Divine.

Sometimes 'The people ahead of us are daunted. The people behind us are tired. The people in the middle, ground down by the struggle, find the going is getting too hard.' We need songs that strengthen our resolve - that help us keep our spirits up - that help us all to 'Keep On Goin'.'(31)

When Lech Welensa was asked 'What did the church contribute to Solidarity?' 'Music' He said. I'm a church based community worker. I've worked in solidarity with disadvantaged groups for nigh on 40 years. And this is the music that I have written to sustain my friends in their labours.

These are not Hill Songs, but Valley Songs, easy-to-sing songs about the joys and sorrows of ordinary people working quietly for love and for justice 'in the valley of the shadow of death'.

I'm not a musician. I'm a community worker. These songs not written for performance, but for participation. These songs are for people to sit with, to walk around with and to sing along with. Please feel free to take these songs, make them your own, and use them as you will.

If you can't sing to it - it's not my kind of revolution, Dave Andrews

Happily, in recording this music, I was helped by some of the most talented musicians I know - Peter Branjerdporn, Andrew Kennedy, Dave Fittell, Rob Haysom, Paul Young, Luke Page, Martin Richards, Evonne Richards, Hudson Read, Eleanor Bowles, Rachael Brady, Andrew Wilcox, Katei Chang, Benjamin Hooper and Marty Kendall; and in writing down this music, I was helped by Greg and Katie Manning who have written out the music notes which can be downloaded with the lyrics, chords and mp3s.

'Dave Andrews and some talented musician friends have put together CDs of songs that remind us that God is "close to the broken-hearted and saves those crushed in spirit" (Psalm 34).'

'They are songs of community encountering hope in the midst of hopelessness. "What Love Is This?" and "The Way of Christ" express the pure amazement we must have for the love that was shown to us by the cross of Jesus. Some songs support moments of deep reflection, others stir us to do the good we know we should do. "Hey Hey You Say" is an anthem-like call to end the war and feed the poor. "We Can Be" is a great encouragement that there is significance in the things we can do - especially when we do them in community. "Set My Heart on Fire" is a song to sustain us in times of struggle. "Don't Be Afraid" calls us to face the fear of encountering those on the margins. After all it is the community that cares for the needy that will find itself in the kingdom where "Love Reigns". This is a great resource for musicians trying to communicate that God is in the midst of those who seek grace and call for justice and do these things in love.'

'The(se) aren't superstar songs - so I suggest you look somewhere else for that kind of music. They are songs to evoke the journey of faith in community. (But) Dave has worked with quite a hot band to put down songs that express the joy and sorrow of that journey. 'Jesus Is On The Mainline' rocks us into this album that helps us to find voice for longing. 'Time Was When' is a gentle look back on the reminiscent glow of many times together with one another and with God. 'For Our Friends' is a soft, jazzy celebration of the ragtag, yet beautiful, community of immigrants who have gathered in our country. 'Tell To Me Now' and 'What A Shame' are poignant songs of longing for healing and fellowship. 'Most Dearly' is probably the least rock-n-roll song on the CD, yet so close to the prayers of our partners as we look for hope in difficult times. I loved the plaintive cello sound that brought such richness to the theme. There's even a couple of love songs tucked away in this collection of 16 songs. Yet the 'rebel Jesus' is the centre of the dreams fulfilled in joy and struggles through sorrow.'

Songs of Joy and Sorrow

These songs are dedicated to all the people I have lived and worked with over the last thirty-five years. 'On the mainline' is the No 1 hit at St Andrew's Community Service where I worship. 'I've got a friend' is a West End 21st Century 23rd Psalm which I wrote one Sunday night with the St Andrew's congregation. 'For our friends' is a song of thanks giving for all the friends we have made along the way. 'Those were the times' celebrates some of the luminous moments that we shared together. 'Only certainty' is an affirmation of faith in the midst of the grief we feel about the friends we have lost along the way. 'Tell to me now' is the longing for healing that I always carry with me like an ache in my heart. 'Love, only love' is a creed for those who can no longer believe in creeds. 'Living in eternity' is a mantra for our friends in the Waiters Union, Sahara House and in Servants. Many of the songs are for my dearest friend Ange. Particularly 'Found it in you', 'Have no fear' and 'So good'. All songs are in memory of 'The rebel Jesus'. Please feel free to take these songs, make them your own, and use them as you will. Dave.

Songs of Hope and Protest

Songs of Grace and Struggle

Songs of Love And Justice